Trusted Jewelers: A Trip Down Memory Lane
A lot has changed in the 18 years since this article was written, but one thing that has not changed is the Zimmer’s family dedication to business integrity and ethics as one of the area’s most trusted jewelers.  Now entering it’s fourth generation of family ownership, Reeds Jewelers continues to be in the capable hands of the Zimmers.  Here is a brief history of how the family got into the jewelry business and made it into a staple of Western New York and beyond.

The original article was posted here in 2002 and written by Joseph H Radder.  The Zimmer Family: Dedicated to Business Integrity.

It All Started in Niagara Falls

When Arnold Zimmer’s father, Samuel, bought Reeds Jewelers in 1932 there was just one store. Under Arnold’s direction and more recently under his son, Jeff’s, the company has grown to a chain of twelve stores, some of them several times the size of the original one.In the beginning, Sam and his wife, Rose, were the mainstays of the business. “My grandmother, Rose, was always at his side.” Jeff said.

Reeds Jewelers is particularly proud of its people. Jeff continued, “Aggressive corporate growth can’t exceed personal growth.” That’s why Reeds has not lost sight of the ongoing need for recruiting fine people and training them for quality customer service and productivity. They are proud of many long term employees, some who have been part of Reeds for more than 50 years. “Family” is as important professionally as it is personally.

We found the family story to be as interesting as the business story.

If the old Niagara Falls house could talk, it could tell hundreds of wonderful stories about the Zimmer family, for it was the house where Arnold grew up and in which he still lives. Jeff and Shelly remember idyllic years there in the 1960s. The Zimmer family homestead is adjacent to the Robert Moses Parkway, near the Niagara Gorge and Devil’s Hole. The parkway hadn’t yet been built when they were little children and they have many happy memories of that peaceful environment.

Education has always been important in the Zimmer family. Arnold, Jeff and Shelly all went to the Maple Avenue School in Niagara Falls and then to Niagara Falls High School. Jeff went on to Northeastern University, where he earned a BS in marketing. Shelly’s college degree is in occupational therapy, her major at Boston University. Arnold earned a BS in economics in 1957 at the Wharton School of the University of Pennsylvania and his late wife, Barbara, graduated from Niagara University.

Father, son and daughter all remember their very first jobs. Jeff’s was as a laborer for a construction firm. Shelly scooped ice cream in Boston and worked as an aide to a playwright there.

The entire family worked in the jewelry store at young ages. When she was a small child, Shelly gift-wrapped jewelry at Christmas time. Jeff, in college, interned at Karten’s Jewelers in Boston. “I’ve been a jeweler my entire adult life” Jeff said.

Not so for Shelly. Although she has spent plenty of time behind the jewelry counter, she also worked as an occupational therapist in Boston, and for the past ten years has been at the Millard Hand Center, where she was its Director until 1999.

Arnold too worked in the jewelry business all his life and he remembers sweeping floors and polishing jewelry. While in college he enjoyed summers in the stores, but his life wasn’t entirely made up of stuff that sparkles. He put his U.S. Army ROTC college training to good use when he served on active duty after the Korean war.

In 1932 grandfather Samuel purchased Reeds single store in Niagara Falls. After his son joined the firm in the late 1950s, they opened a store at Mil-Pine Plaza. Later, Arnold was involved in the firm’s growth as they expanded to Summit Park and Seneca Malls. There was also an expansion early on, as Reeds became an importer and manufacturer as well as a retailer. Ever since then stones have been purchased overseas and made into beautiful pieces of jewelry right here in Western New York.

“The business is my hobby,” Jeff said when asked about recreation.

Arnold received the Humanitarian of the Year award from the New York State Jeweler’s Association in 1989. He was vice president of Temple Beth Israel in Niagara Falls and was a Director of the Western Savings Bank.

Jeff follows Arnold’s leadership example and is vice president of the Diamond Council of America, a non-profit organization dedicated to the education of jewelry sales personnel.

They do much for many causes – often anonymously.

Reeds success story is very impressive. In the 1960s expansion went into high gear. Two Reeds stores opened in shopping malls in the Buffalo area. Also in the 1960s, Rose Zimmer became president of the firm, serving until 1975 when her son Arnold succeeded her.

In 1972 another new store was opened in a new Niagara Falls mall. The 1980s and 1990s saw Reeds most aggressive expansion under Jeff’s leadership. A carefully planned program resulted in new openings in five major markets in upstate New York, Connecticut Pennsylvania, Ohio and New Jersey.

As if running a major jewelry chain weren’t enough, the firm opened its own advertising agency in 1989.

The Zimmer family’s latest triumph has been the development of four new Reeds Jenss stores in Buffalo, Rochester, Erie Pennsylvania and Youngstown Ohio. Each of these free standing stores is in excess of 10,000 square feet and combines the finest brands of trusted jewelry and giftware. Elegant ambience provides real pleasure while enjoying the opportunity to select the finest of quality merchandise. Customers have received these new stores with overwhelming approval.

The marketing expertise of the Zimmer family has clearly been the key to Reeds fabulous growth. They understand the value of supplying what customers want in both beauty and quality, merchandising it attractively, pricing it fairly and making it available in elegant surroundings.

Value governs all phases of Reeds operations. From the commitment of president Jeffrey Zimmer to the selection of vendors, associates, store personnel and the finest merchandise, the goal is to develop lasting relationships with satisfied customers. Jeffrey calls this “our real value philosophy.”

“Real value also means truth in pricing,” he says. Merchandise is represented accurately and pricing is never manipulated or inflated to make room for sales or discounts. “Our one price philosophy is a real value for our customers.”

It has been said that the apple never falls far from the tree. Clearly Arnold is a product of Samuel and Rose’s integrity and industriousness; and Jeff and Shelly are following the family traditions with great care and great pride.

It is wonderful to meet people who obtain genuine pleasure from serving the public honestly with quality merchandise in beautiful stores.

We look forward to the contributions of the next generation.

So that is the article from 2002.  We would love to hear any stories or experiences you have had with the Zimmer family or how Reeds have been your trusted jewelers over the years.  Thank you. 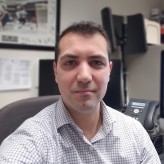 I have been with Reeds since 2015 as their Marketing and Creative Director.